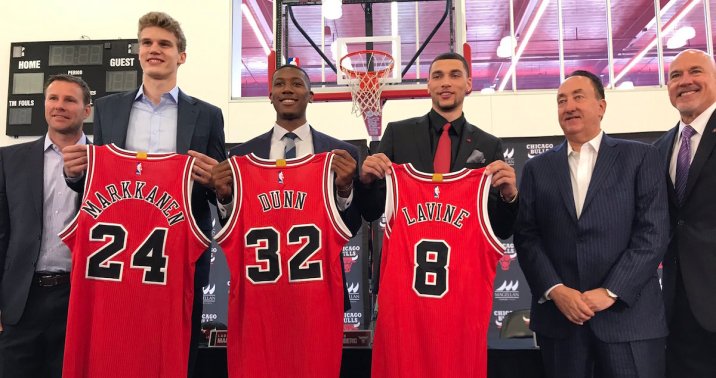 When the Bulls traded Jimmy Butler for Zach LaVine, Kris Dunn, and the rights to Lauri Markkanen, the Bulls said they were going in a new direction and it was clear that the Bulls were beginning a rebuild.  The Bulls said they chose a direction and the haul they got for the disgruntled Jimmy Butler was impressive.  Many fans had been enamored by the athleticism and potential of Zach Lavine.  His highlight reel dunks and obvious scoring ability, combined with his youth, made him the perfect face of this rebuild.  The Chicago Tribune’s KC Johnson has used the term “cornerstone of the Bulls rebuild” several times to describe LaVine, meaning he is the most important piece.  Bulls management was openly a fan of Kris Dunn when he came to the NBA from Providence, but they weren’t quite willing to pull the trigger in the 2016 draft and trade Jimmy Butler to take him.  After a disappointing rookie campaign, the Bulls were able to acquire him in the larger Butler trade.  Then, there’s Lauri Markkanen.  The first time I watched Lauri play at Arizona was in the Pac-12 tournament against UCLA and I watched him and said, “Man, I’d love to see him in a Bulls jersey.”  Even though I wanted Markkanen, I didn’t think it was wise to trade Butler for him, LaVine (whom I’ve never been a fan of), and Dunn (always had my doubts about his game even though I like him).  But Markkanen was outstanding in his rookie year and it was clear that the Bulls made a great decision trading Jimmy Butler for these three guys and they had a potential foundation for the future.

This season, like last season and probably every season since Derrick Rose tore his ACL, the Bulls have had horrible injury luck.  The promising trio of Dunn, LaVine, and Markkanen have played a combined total of 18 games in the past two seasons.  These guys are still trying to find out how to play with each other and develop chemistry.  I have a general rule: Don’t make any definitive judgments in the NBA until you’ve seen a pattern for 30-40 games.  But watching these three, even in limited minutes, I have some growing concerns that these three can play together.  Their three-man lineup was -116 last year per Basketball-Reference.  This year it’s better, but still -10 in a really small sample size.

Most of the concerns start with Zach LaVine.  In two-man lineups, LaVine was -121 with Kris Dunn and -120 with Lauri Markkanen last year.  This year, he’s -14 with Dunn and -32 with Markkanen. The start of this season was incredible for him, but it didn’t translate to team success.  Perhaps we can blame Hoiberg or injuries – and those are valid excuses – but my biggest fear with LaVine is that his success won’t be the team’s success.  Per Basketball-Reference, Zach LaVine has played in 262 NBA games over the course of his career and won 76 of them.  Over the course of his career, he’s 76-186.  He’s won a mere 29% of his games.  Is that all on him?  Of course not.  But he hasn’t seen what it takes to win in this league.  Is he willing to make sacrifices to his game to make the Bulls better?  Can he become a more rounded player and contribute more than just buckets?  As I detailed in this video last year, historically the guys with Zach LaVine’s statline of 20+ points, but less than 5 rebounds, and less than 5 assists are really good players, but not those franchise altering superstars that could take you to another level.  I’m afraid that’s LaVine’s ceiling.

My greatest fear for Zach LaVine is that he will hinder what should be the ascension of Lauri Markkanen as our franchise player.  The Bulls are 2-7 in the Jim Boylen era with Zach LaVine, but went 3-2 without him. Here are Lauri Markkanen’s stats with and without LaVine:

YIKES!  In a relatively fair sample size, it’s clear that Markkanen performs better without LaVine and also, the team has success. What about last season?

The fall off isn’t as severe, but there is a still a difference.

I still want to see these three play 30-40 games together this season before pushing the panic button, but it’s definitely something I’m watching.  Hopefully just playing together in more games and developing chemistry will solve this.  If not, the Bulls will have a decision to make and will likely need to pick either Zach LaVine or Lauri Markkanen.  We’re still a long way away from that potential scenario, but if these three don’t develop chemistry, we could see that play out.